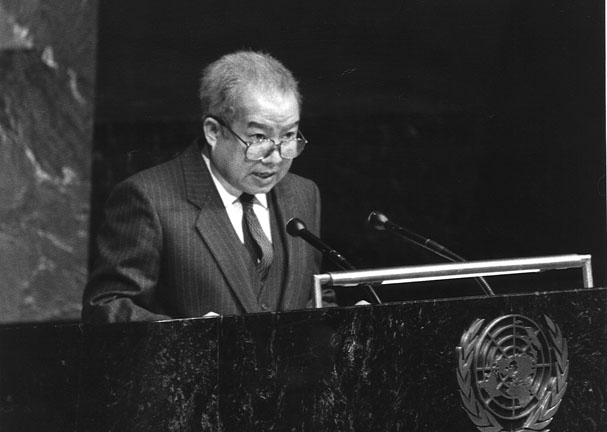 The Coalition Government of Democratic Kampuchea were not only the government in exile of the Khmer Rouge, but tragically the recognized government of Cambodia in the UN, and the broader western world.

The Khmer Rouge and  have rightly been acknowledged as one of the worst genocidal regimes in modern history, and statistically at least killing more of their own population than any other country.

You’d think that a regime like this would have been obliterated, have all recognition withdrawn, and have been hunted down as killers. Alas, the 1980s were an extraordinary time for all involved, and the Khmer Rouge not only survived but flourished with support from the western world. The Cambodian seat at the United Nations even stayed in their control from their ouster in 1979, until 1989.

How did the Khmer Rouge manage to survive for so long?

The Khmer Rouge regime, whilst popular at the outset, managed to kill so many people and ravage the country to such a level that with a few defections and help from the Vietnamese Democratic Kampuchea fell quite quickly.

A regime was then put in by the Vietnamese, in turn, supported by the Soviet Union that proved unpopular with a lot of very strange bedfellow. The now opposition Khmer Rouge were supported by Thailand, China, North Korea, the UK, and while they still take pains to try and deny it the USA.

Thus the Cambodian civil war became a proxy cold war battle between all the big powers. War criminals represented the “legitimate government,” and a fully-funded government in exile was allowed to exist.

The Coalition Government of Democratic Kampuchea ironically ended up being a coalition between King Sihanouk, a few other rebel groups, and the Khmer Rouge, in a repeat of what had initially brought Pol Pot into power in the country in 1975.

Whilst broadly, and officially a coalition the Khmer Rouge and its armed wing were by far the main players in the group, and whilst they denounced communism to officially embrace “democratic socialism”, and Pol Pot was removed from being head of  (the organization), in reality very little changed.

In 1989 Kampuchea was renamed into the , and it finally seemed that peace would come to the country, even though the Coalition Government of Democratic Kampuchea still controlled 6% of the country.

Despite losing their western support, the Khmer Rouge realizing they would not win any election in the country decide to fight on, a situation would continue until 1998.

In 1993 following relative peace in the country, the coalition was dissolved, with the rump Khmer Rouge, who still controlled a good part of the country, forming the in competition to the newly reformed Kingdom of Cambodia.

This final incarnation of the Khmer Rouge rule rolled on until 1998 when following several high profile defections and Pol Pot’s death in obscurity; the Khmer Rouge was finally dissolved on June 22nd, 1998

Since then, Cambodia has slowly started to deal with its tragic past, but there still has been no such reckoning on the involvement of other nations in this tragic affair.